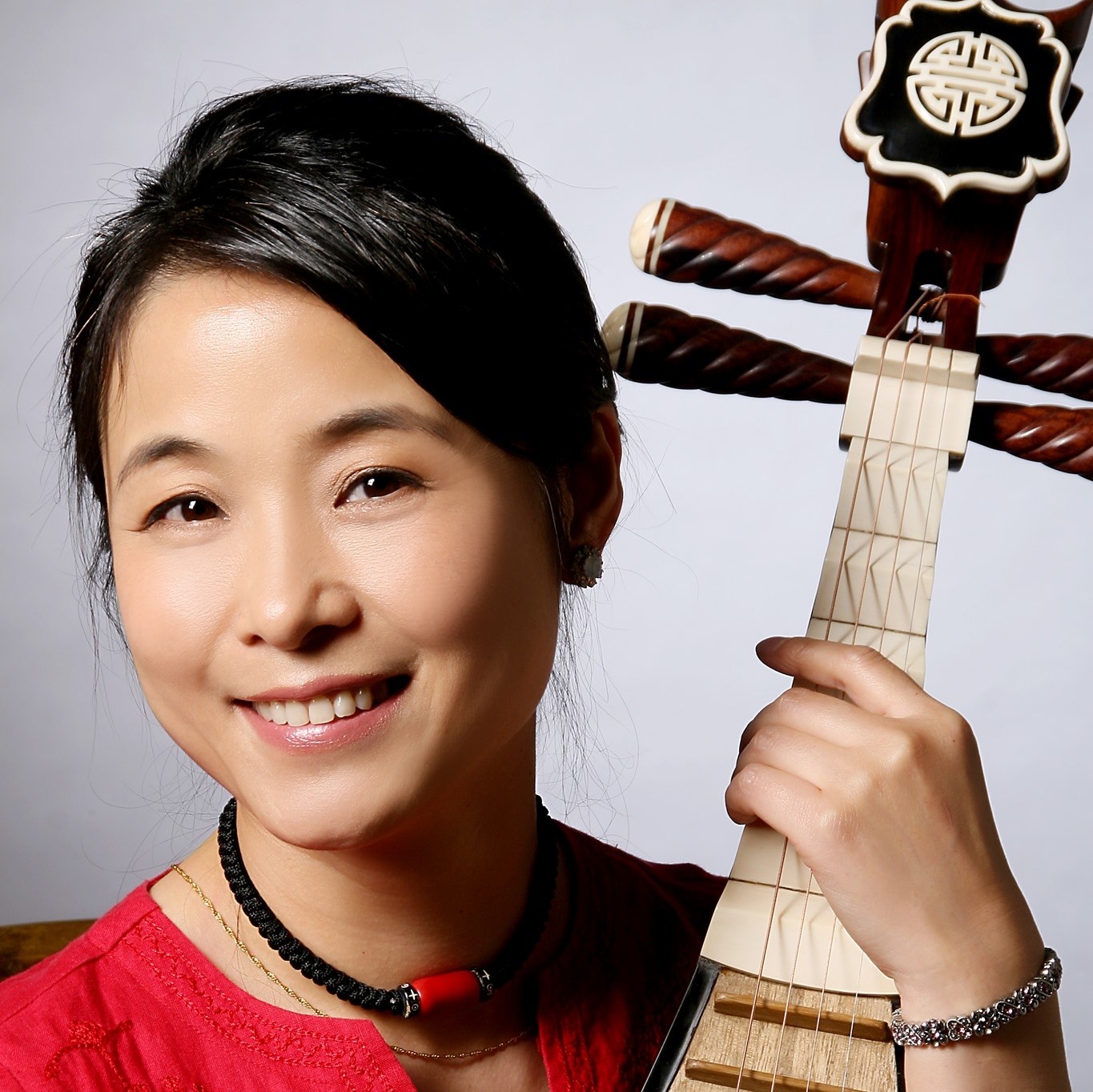 Recognized as the world’s premier pipa virtuoso and leading ambassador of Chinese music, Wu Man has carved out a career as a soloist, educator, and composer giving her lute-like instrument—which has a history of over 2,000 years in China—a new role in both traditional and contemporary music. Through numerous concert tours she has premiered hundreds of new works for the pipa, while spearheading multimedia projects to both preserve and create awareness of China’s ancient musical traditions. Her adventurous spirit and virtuosity have led to collaborations across artistic disciplines, allowing her to reach wider audiences as she works to cross cultural and musical borders. Her efforts were recognized when she was named Musical America’s 2013 “Instrumentalist of the Year,” marking the first time this prestigious award has been bestowed on a player of a non-Western instrument.

Having been brought up in the Pudong School of pipa playing, one of the most prestigious classical styles of Imperial China, Ms. Wu is now recognized as an outstanding exponent of the traditional repertoire as well as a leading interpreter of contemporary pipa music by today’s most prominent composers such as Tan Dun, Philip Glass, the late Lou Harrison, Terry Riley, Bright Sheng, Chen Yi, and many others. She was the recipient of The Bunting Fellowship at Harvard University in 1998, and was the first Chinese traditional musician to receive The United States Artist Fellowship in 2008. She is also the first artist from China to perform at the White House. In 2015, she was appointed Visiting Professor of three major Chinese conservatories: her alma mater the Central Conservatory of Music in Beijing, Xi’an Conservatory of Music, and Zhejiang Conservatory in her hometown; she has also served as Artistic Director of the Xi’an Silk Road Music Festival at the Xi’an Conservatory.

Ms. Wu’s concert schedule during the 2019-20 season includes chamber and orchestral performances that range from traditional Chinese music to newly commissioned works. At the Universities of Maryland and Chicago in October, she leads a multi-cultural ensemble as they explore music drawn from manuscripts of China’s Tang Dynasty (618-907), highlighting in performance the influence of this era’s traditions on the music of ancient Japan—from Noh theatre to gagaku court music. In both performances, she is joined by wind and percussion players Yazhi Guo (suona and Chinese percussion), Kaoru Watanabe (taiko and Japanese flute), and Tim Munro (Western flute).

Less than a month later, Ms. Wu appears with the Silkroad Ensemble, of which she is a founding member, in the world-premiere performances of resident composer Osvaldo Golijov’s newly commissioned song cycle Falling Out of Time. The work is a musical interpretation of the book by David Grossman, which narrates a journey “out of time” as parents grieve the death of their child. Falling Out of Time is the centerpiece of the Silkroad Ensemble’s seven-city eastern U.S. fall tour, which begins with the work’s world premiere at College of the Holy Cross, where the piece took shape in workshops beginning in fall 2017. Additional performances take place at the Germantown Performing Arts Center (Germantown, TN), Wolf Trap (Fairfax County, VA), and Virginia Tech (Blacksburg, VA), and excerpts are performed as part of programs at Penn State (State College, PA), the University of Alabama at Birmingham, and the Peace Center (Greenville, SC). This tour follows world premieres last season in which Ms. Wu joined the Silkroad Ensemble on tour across the U.S., Asia, and Australia in celebration of the group’s 20th anniversary. Ms. Wu also tours Europe this season as a Master Musician in the Aga Khan Music Initiative—a group of performers, composer-arrangers, teachers, and curators who create music inspired by their cultural heritage of the Middle East, South and Central Asia, West Africa, and China.

All of Ms. Wu’s orchestral engagements this season feature music originally written for her, a reflection of her leading role in cultivating a robust concerto repertoire for the pipa. She performs Tan Dun’s Pipa Concerto (with Ottawa’s National Arts Centre Orchestra and the South Bend Symphony), which the composer adapted from his Ghost Opera written for Ms. Wu and Kronos Quartet; Zhao Jiping’s Pipa Concerto No. 2 (with the Lexington Symphony), which was written for her and premiered by her at the Sydney Opera House with the Sydney Symphony Orchestra; Houston-based Taiwanese composer Shih-Hui Chen’s pipa concerto Jin (with the National Taiwan Symphony Orchestra in the work’s Asian premiere); and Zhao Lin’s concerto for pipa and cello A Happy Excursion (with cellist Qin Li-Wei and the Singapore Symphony), a work that she and Yo-Yo Ma premiered last season with the Hangzhou and New York Philharmonics.

Additional concerto performances take place as part of Ms. Wu’s residency at Beijing’s National Center for the Performing Arts, marking the first time that a performer of a traditional instrument has been an NCPA resident artist. She performs Zhao Lin’s A Happy Excursion, as well as Vincent Ho’s Rejuvenation: A Taoist Journey, which she originally premiered with the Toronto Symphony. She also gives lectures, works with faculty and students, leads master classes and workshops, and performs music from her recording Our World in Song with the Daniel Ho Trio, following separate performances of this program in Shanghai and Hangzhou.

Among Ms. Wu’s most fruitful collaborations is with Kronos Quartet, with whom she began collaborating in the early 1990s. They premiered their first project together, Tan Dun’s Ghost Opera,at the Brooklyn Academy of Music in 1995. The work was recorded and released on Nonesuch in 1997.  Additional Kronos Quartet recordings featuring Wu Man for Nonesuch include Early Music, on which she plays the zhong ruan and da ruan (string instruments related to the pipa) in John Dowland’s Lachrymæ Antiquæ and the Grammy-nominated You’ve Stolen My Heart, an homage to the composer of classic Bollywood songs Rahul Dev Burman, featuring Ms. Wu alongside the Quartet, singer Asha Bhosle, and tabla player Zakir Hussain. She participated in the Quartet’s 40th Anniversary celebration concerts at Cal Performances in Berkeley, CA and at Carnegie Hall; was Artist-in-Residence with the Quartet in February 2016; became the second inductee into the “Kronos Hall of Fame” (joining Terry Riley); and composed her first piece for western instruments, Four Chinese Paintings, for the Quartet’s “50 for the Future” project. Last season in Washington, D.C., she and the Quartet reprised their multimedia work A Chinese Home, conceived in collaboration with theater director Chen Shi-Zheng and premiered at Carnegie’s Zankel Hall in 2009.

As a principal musician in Yo-Yo Ma’s Silkroad project, Ms. Wu has performed throughout the U.S., Europe and Asia with the Silkroad Ensemble. She is a featured artist in the documentary The Music of Strangers: Yo-Yo Ma and The Silk Road Ensemble, as well as on the film’s 2017 Grammy Award-winning companion recording, Sing Me Home (“Best World Music Album”), which includes her original composition Green (Vincent’s Tune) performed with the vocal ensemble Roomful of Teeth. She has recorded six albums with the group: Silk Road Journeys: When Strangers Meet (2002), Silk Road Journeys: Beyond the Horizon (2005), New Impossibilities (2007), the CD/DVD A Playlist Without Borders / Live from Tanglewood (2013), and Sing Me Home (2016) on Sony Classical, as well as Off the Map (2009) on World Village. Her Silkroad Ensemble performances in recent years have included tours of the U.S. during the regular season and to summer festivals such as Tanglewood, Wolf Trap, Blossom, Ravinia, and Hollywood Bowl, a tour of Asia, and performances with Mark Morris Dance in Berkeley and Seattle.

Adamant that the pipa does not become marginalized as only appropriate for Chinese music, Ms. Wu strives to develop a place for the pipa in all art forms. Projects she has initiated have resulted in the pipa finding a place in new solo and quartet works, concertos, opera, chamber, electronic, and jazz music as well as in theater productions, film, dance, and collaborations with visual artists including calligraphers and painters. Her role has developed beyond pipa performance to encompass singing, dancing, composing, and curating new works. She has premiered works by Chinese composers including Zhao Jiping, Tan Dun, Bright Sheng, and Chen Yi. Other notable projects include Orion: China, co-written with Philip Glass for the 2004 Summer Olympics in Athens and recorded the following year; and Blue and Green, an original composition that she premiered with The Knights. Recent projects have seen her rediscover, embrace, and showcase the musical traditions of her homeland, projects she has dubbed “Wu Man’s Return to the East.” In 2009, she was asked to curate two concerts at Carnegie Hall as part of the “Ancient Paths, Modern Voices” festival celebrating Chinese culture. Ms. Wu and the artists she brought to New York from rural China for the festival also took part in two free neighborhood concerts and a concert presented by the Orange County Performing Arts Society in Costa Mesa. In August 2012, she released a documentary DVD titled Discovering a Musical Heartland: Wu Man’s Return to China as part of her ongoing “Return to the East” project. In the film, she travels to little-explored regions of China to uncover ancient musical traditions that have rarely been documented before. Among the musicians she met on her journey were the Huayin Shadow Puppet Band, which she brought to the U.S. for the first time—touring to 11 cities around the nation.

Ms. Wu boasts a discography of over 40 albums including the Grammy Award-winning Sing Me Home (“Best World Music Album”) with the Silkroad Ensemble on Sony; the Grammy Award-nominated Our World in Song, featuring familiar folk songs from around the world arranged by her with Hawaiian instrumentalist Daniel Ho and Cuban percussionist Luis Conte; and Elegant Pipa Classics, which combines traditional pipa repertoire with modern compositions, both released by Wind Music. Traditions and Transformations: Sounds of Silk Road Chicago features her Grammy Award-nominated performance of Lou Harrison’s Pipa Concerto with the Chicago Symphony Orchestra, as well as a Grammy-nominated recording of Tan Dun’s Pipa Concerto with Yuri Bashmet and the Moscow Soloists on Onyx Classics. In May 2012, she released her Independent Music Award-nominated CD / DVD Borderlands, which traces the history of the pipa in China. It is the final installment of the acclaimed ten-volume “Music of Central Asia” ethnographic series produced by the Aga Khan Trust for Culture and the Smithsonian Institution Center for Folklife and Cultural Heritage. In Wu Man and Friends, released on Traditional Crossroads in 2005, she blends Chinese, Ukrainian, Ugandan, and Appalachian traditional music, performing alongside musicians from these regions.Her solo recordings include Pipa: From a Distance, released on Naxos World Music in 2003, and Immeasurable Light, released on Traditional Crossroads in 2010. Fingertip Carnival, her latest release for Wind Music, explores the connections between Chinese and Mexican folk music and each culture’s use of stringed instruments with the San Diego-based son jarocho group Son de San Diego.

Born in Hangzhou, China, Ms. Wu studied with Lin Shicheng, Kuang Yuzhong, Chen Zemin, and Liu Dehai at the Central Conservatory of Music in Beijing, where she became the first recipient of a master’s degree in pipa. Accepted into the conservatory at age 13, her audition was covered by national newspapers and she was hailed as a child prodigy, becoming a nationally recognized role model for young pipa players. She subsequently received first prize in the First National Music Performance Competition among many other awards, and she participated in many premieres of works by a new generation of Chinese composers. Her first exposure to Western classical music came in 1979 when she saw Seiji Ozawa and the Boston Symphony Orchestra performing in Beijing. In 1980 she participated in an open master class with violinist Isaac Stern, and in 1985 she made her first visit to the U.S. as a member of the China Youth Arts Troupe. She moved to the U.S. in 1990 and currently resides in California.