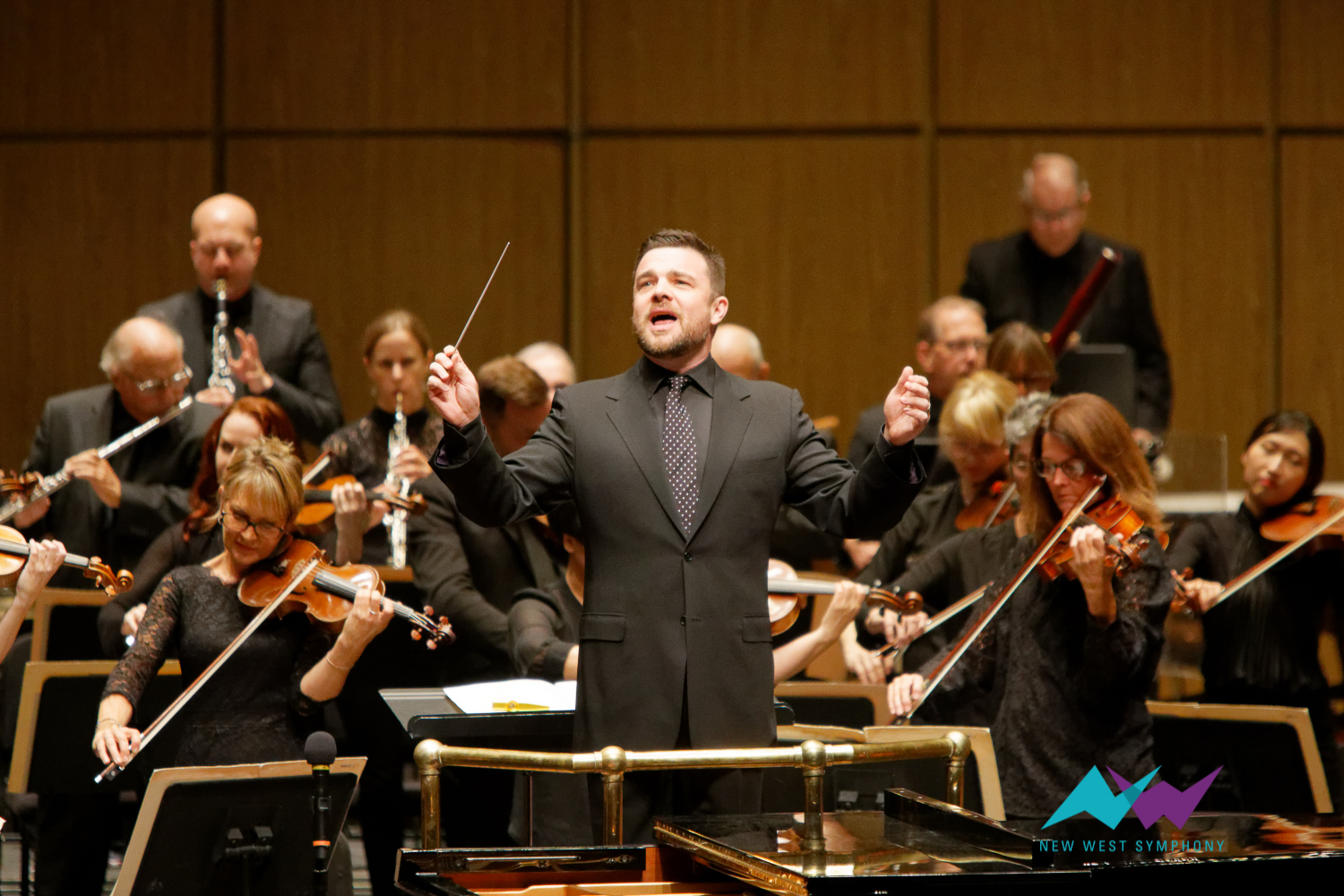 GRAMMY® award-winning conductor Michael Christie is an innovative conductor, equally at home in the symphonic and opera worlds, who is focused on making the audience experience at his performances entertaining, enlightening and enriching. The New York Times reports, “Michael Christie is a director open to adventure and challenge,” and the Cincinnati Enquirer declares, “If Michael Christie represents the future of music in this country, the future looks promising indeed.”

In response to COVID-19 restrictions, Christie led the New West Symphony’s 2020-21 season of digital concerts as part of eight mini-festivals, each highlighting the music, cultures and family traditions within Ventura County and surrounding communities, while emphasizing connections with orchestral repertoire.

In his first season as Music Director in 2019-20, Christie introduced two audience engagement initiatives: Intermission Insights, 10-minute onstage interviews with the musicians; and Entr’Acte, a newer work performed during intermission. Of his opening concert as Music Director and immediate embrace of a more diverse and inclusive season, the Los Angeles Times reported that the orchestra is “embracing the mission of refreshing the modern concert experience for a new generation,” and praised their performance of Rimsky-Korsakov’s Scheherazade, as “far and away the most spectacular playing from what should no longer be considered a regional symphony.”

Christie won a 2019 GRAMMY award (Best Opera Recording) for the world premiere recording of Mason Bates’ The (R)evolution of Steve Jobs with The Santa Fe Opera (PENTATONE). In 2017, he led the world premiere performances at The Santa Fe Opera, “with suave assurance” (San Francisco Chronicle), with “precision and pizzazz” (Santa Fe New Mexican) and “preside[d] over an expertly executed performance” (The Financial Times).

Michael Christie was featured in Opera News in August 2012 as one of 25 people believed to “break out and become major forces in the field in the coming decade.” At Minnesota Opera, Christie led 24 productions over eight years, with six seasons as its first-ever Music Director (2012-18) – from staples of the repertory such as La Traviata, Nabucco, Macbeth, La bohème, Fanciulla del West, Arabella, and Das Rheingold to performances of 20th– and 21st-century operas via the company’s New Works Initiative, including Bernard Herrmann’s only opera Wuthering Heights, the world premiere of Kevin Puts’ Silent Night, which won the Pulitzer Prize in 2012, the world premiere of Kevin Puts’ The Manchurian Candidate, and the world premiere of Paul Moravec’s The Shining.

Other highlights include Christie’s San Francisco Opera debut in the world premiere performances of Mark Adamo’s The Gospel of Mary Magdalene and Twenty-Seven by Ricky Ian Gordon at Opera Theatre of St. Louis. Notable past performances include highly praised productions of John Corigliano’s The Ghosts of Versailles and John Adams’ The Death of Klinghoffer, and the North American premiere of Unsuk Chin’s Alice in Wonderland, all with Opera Theatre of St. Louis; the European premieres of The Ghosts of Versailles at the Wexford Festival Opera; as well as performances at Opernhaus Zürich, Finnish National Opera, Scottish Opera, Lyric Opera of Kansas City and Lyric Opera of Chicago. In addition to premiering Kevin Puts’ Silent Night with Minnesota Opera, he led performances by Opera Philadelphia, Wexford Festival Opera and Opéra de Montréal.

Christie’s New York Philharmonic debut came in 2007 when he stepped in on short notice for an ailing Riccardo Muti, and his Carnegie Hall debut came in 2014 when he led the Rochester Philharmonic Orchestra as part of the Spring for Music Festival. Christie also served as the Music Director of the Colorado Music Festival from 2000-13, where he was highly praised for his innovative programming and where audiences grew to an all-time high, resulting in him being named “Musician of the Year” by The Denver Post in 2010.

Michael Christie first came to international attention in 1995 when he was awarded a special prize for “Outstanding Potential” at the First International Sibelius Conductors’ Competition in Helsinki. Following the competition, he was invited to become an apprentice conductor with the Chicago Symphony Orchestra where he subsequently worked with Daniel Barenboim as well as at the Berlin State Opera during the 1996-97 season. Christie graduated from the Oberlin College Conservatory of Music with a bachelor’s degree in trumpet performance. Christie lives in the Twin Cities with his wife, Alexis, a physician, and their two children. For more information, visit michaelchristieonline.com. 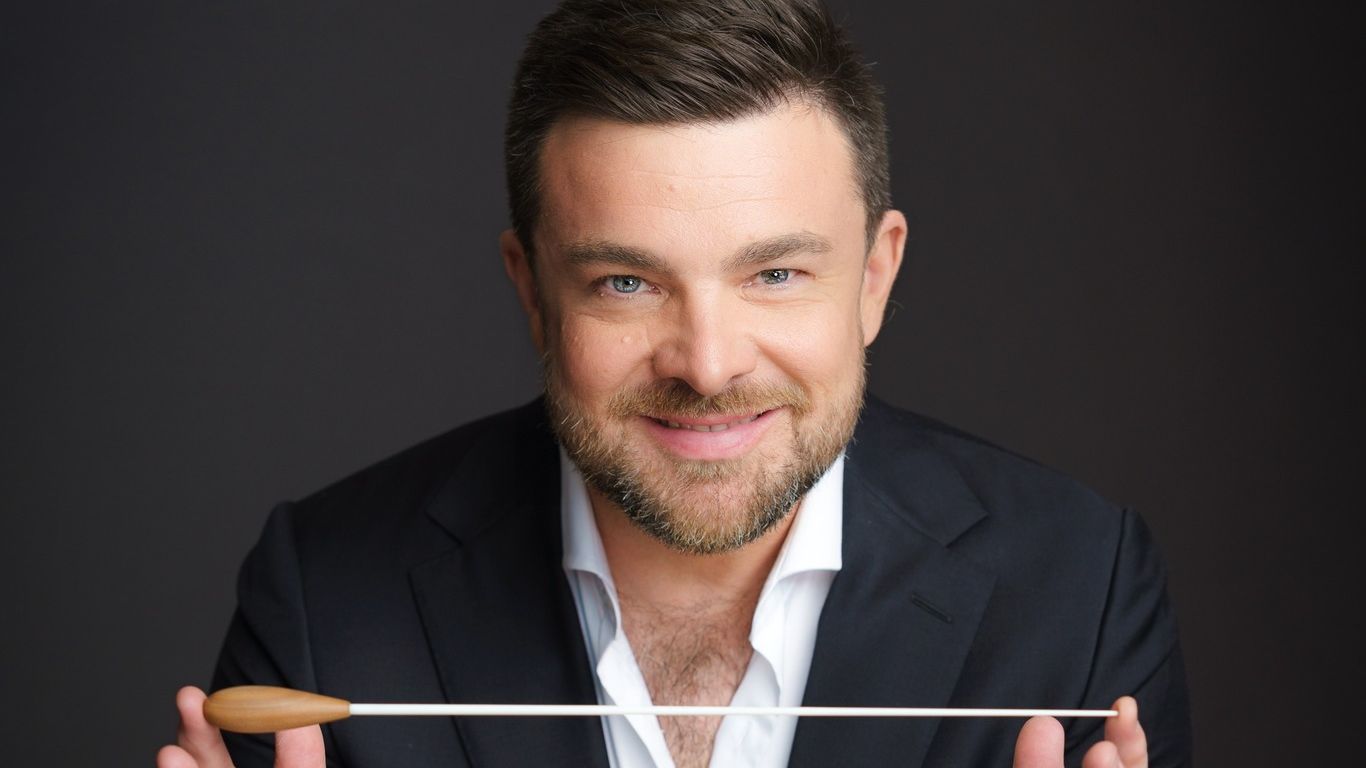 “The rapidly shifting opera world seems to promise a minefield of challenges in the decade to come — more production-sharing, the need to invigorate the repertoire, and to do smaller-scale versions of cumbersome big works. Few conductors seem as well poised to meet this period of adjustment as Michael Christie.” – Opera News

“If Michael Christie represents the future of music in this country, the future looks promising indeed.” – Cincinnati Enquirer

“The (R)EVOLUTION OF STEVE JOBS opened brilliantly as a mainstage production of the Atlanta Opera, in its East Coast premiere, under Tomer Zvulun’s taut direction and Michael Christie’s smart baton. To say the audience greeted the work joyfully would be an understatement.”
– Broadway World

“The Atlanta Opera Orchestra, under the baton of Michael Christie, was at the top of its game. They sounded fully engaged in the music, contributing mightily to the opera’s vital energy and forward momentum.” – EarRelevant

​“Conductor Michael Christie led an assured, stylistically sound, and dramatically pliable reading, inspiring the exceptional DMMO orchestra to respond with an ensemble effort that ranged in effects from luxuriant, to lush, to contemplative, to crackling. Maestro Christie excelled at accommodating his singers, partnering them with great finesse.” – Opera Today

“[Christie] brings his expertise in new music to bear on this classic score, leading the LOC orchestra with urgency and dramatic sensitivity. [Verdi’s La traviata]” – Schmopera

“Michael Christie elicited from the Lyric Opera Orchestra a performance that brought forth the subtleties of Mozart’s majestic score beautifully.” – Opera Warhorses

“Michael Christie led the orchestra in a sprightly pace; the chorus were in good voice.” – Bachtrack

“Conductor Michael Christie, who has made recent marks bringing new American opera to the stage … did excellent work. He encouraged the singers to indulge in their rattled characters’ most intimate reflections without losing grip of the music’s exciting forward motion. [Verdi’s La traviata]” – Chicago Sun Times

“And in an impressive Lyric Opera debut, conductor Michael Christie led the Lyric orchestra in the life-affirming energy of the opera’s grand waltzes and familiar ‘brindisi’ drinking song, and in the pathos of love and intimations of death. Viva Verdi. [La Traviata]” – WWTW Chicago

“And Bates’ score, led with suave assurance by conductor Michael Christie, constantly finds ways to encapsulate a character or a dramatic situation that are accessible but rarely obvious.” – San Francisco Chronicle

“From the opera’s fragile prelude to the Champagne brilliance of the soiree that first fills the stage to the last strains that accompany Violetta’s death, Verdi’s dramatic tapestry flowed from the Lyric Opera Orchestra. Christie led with a consummate sense of both the opera’s instrumental voice and its interplay with the characters before him. [La traviata]” – Chicago on the Aisle

“Michael Christie conducted with precision and pizzazz, and a couple of orchestral interludes truly got the adrenaline pumping. One of them, at about the opera’s one-hour mark, accompanies projected images charting the meteoric rise of the company and its growing complication as a corporate organism. I wouldn’t be surprised if it were extracted to stand as a frenetic orchestral showpiece in its own right.” – Santa Fe New Mexican

“Yet the highest praise should be reserved for those given the tallest task: conductor Michael Christie and the orchestra. From the hypnotic, slow-building opening to the final triumphal entry into Valhalla, they offer non-stop transportation to a magical world.” – Pioneer Press

“The true star of the opera in my book, however, was undeniably Maestro Michael Christie, who, like an elite athlete, exerted just enough energy to convey exactly what he wanted from his orchestra, one of the best in the business in my book.” – Opera Sense

“Both the subtle colorings and pummeling intensity came through in the compelling performance the conductor Michael Christie drew from the St. Louis Symphony Orchestra.” – The New York Times

“Conductor Michael Christie, who has shown great skill and sensitivity in the past with everything from Puccini to John Adams, once again directs the orchestra…in a persuasive performance.” – KDHX

“Christie…shows why he’s an outstanding conductor in the pit.” – Post-Bulletin

“Conducting with restraint and precision, Christie captured the American spirit — its determination, resourcefulness and optimism — with a steady rhythmic pulse.” – The Press Democrat

“Christie…is an elegant conductor with balletic arm movements and a firm grasp of rhythm. He is at once restrained and expressive, an expert at using his undulating arms to lead the orchestra in thunderous crescendos and whispering diminuendos.” – San Francisco Classical Voice

“Minnesota Opera has put together an excellent ensemble, while conductor Michael Christie and the orchestra do fine things with the score [for Heggie’s Dead Man Walking].” St. Paul Pioneer Press

“The results were close to perfection … [Christie] has crafted a smart, cohesive, and accessible playlist of mostly Italian masters, and in the process, has presented the RPO in a new, refreshing light.” – Rochester City Newspaper

“’Figaro’ is a long show that flies by, thanks to crisp conducting by Michael Christie, fast-paced direction by Lawless and a versatile scenic design by Leslie Travers.” – Post-Bulletin

“Michael Christie and the MN Opera Orchestra delivered a fine performance, and the house (which was unsurprisingly full) was energized and engaged throughout.” – Life in Revue