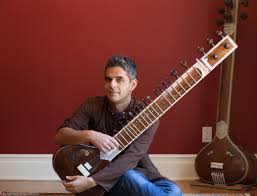 Rahul Neuman has been a student of Hindustani music since he was a child. He began studying sitar at age 12 with his aunt, Sharmistha Sen, and Jeff Lewis, a disciple of the late Z.M. Dagar. In 1992, Neuman began intensive training under his guru, Ustad Shujaat Khan, in Seattle, where he was a visiting artist at the University of Washington.

Neuman made several subsequent trips to New Delhi, India, where he continued training under the guidance of his guru.

Neuman has performed at a variety of venues in Delhi, Chicago, and Southern California. In Chicago, he performed at the Silk Road Oasis, the University of Chicago, the Old Town School of Folk Music, and on Chicago NPR station WBEZ-FM. He also performed for MTV’s Aerosmith icon show in front of a live audience. Currently, Rahul is an Artist-Teacher in Residence for the Center for World Music in San Diego.