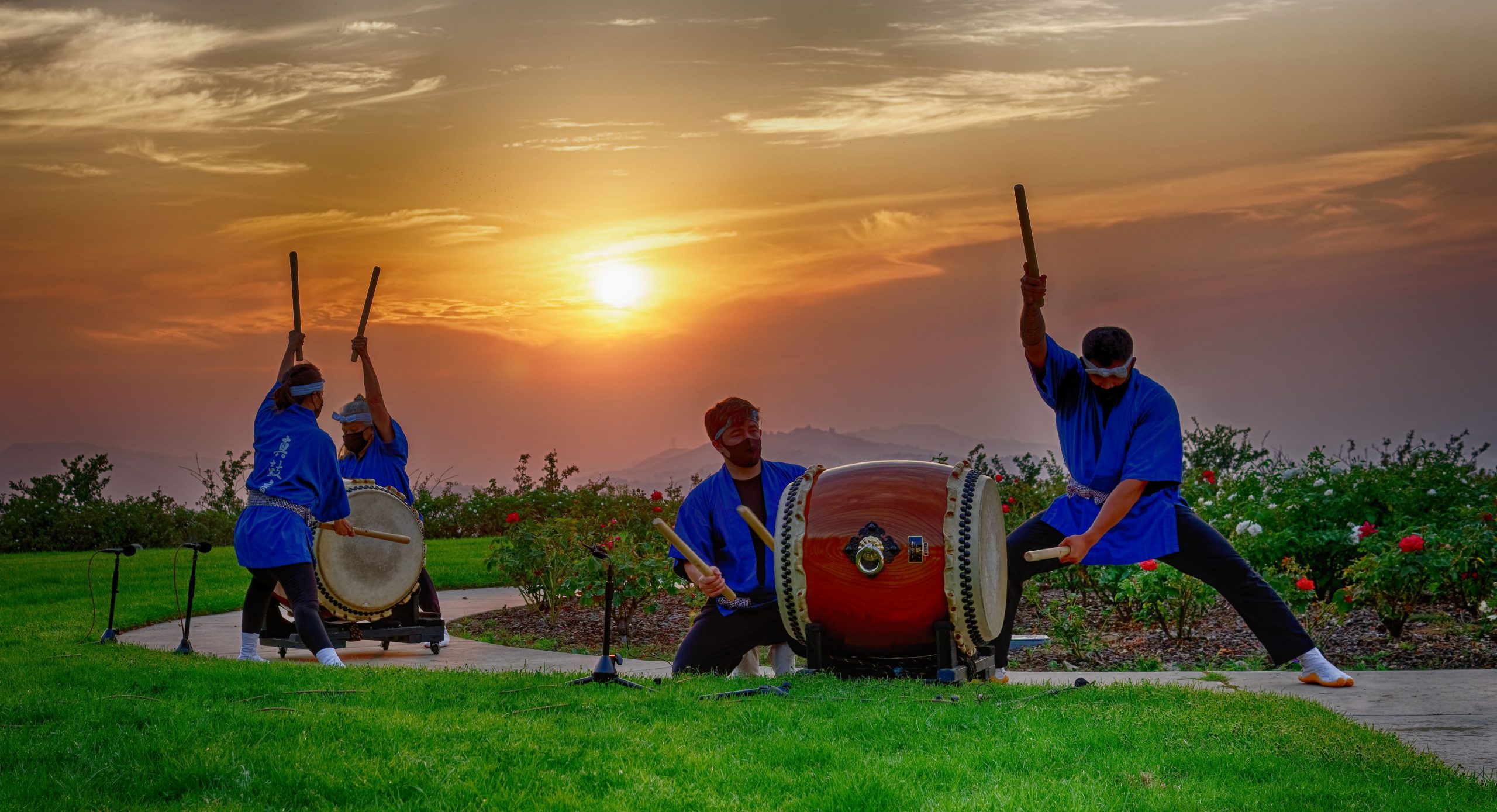 Makoto Taiko seeks to unite people of all backgrounds in our local and global communities by preserving and sharing the spirit of Japanese taiko drumming through performances, classes, and other charitable and educational activities.

The Makoto Taiko ensemble centers its performance around traditional Japanese taiko drums.  The Pasadena-based community group was established in 1999 and has grown to include eighty members.  Through precisely articulated rhythm and movements, Makoto Taiko’s drumming provides a spiritually powerful experience that, despite its Japanese origin, transcends cultures. Makoto Taiko’s mission is to unite people of all backgrounds in our local and global communities by preserving and sharing the spirit of Japanese taiko drumming through performances, classes, and other charitable and educational activities. The literal translation of “MAKOTO” is “pure drum sound.” Additionally, its meaning can be interpreted as a state in which one’s actions are fully aligned with his/her thoughts and ideals.  This is a discipline requiring sincerity, honesty, altruism, and integrity.  Each performer strives to elevate his/her own spirituality along with that of each person in attendance by drumming with a sense of “MAKOTO.”

Makoto Taiko’s membership is open to individuals of all ages as well as to those without any prior drumming experience. The group’s membership consists of approximately 80 students from diverse backgrounds. Many of our members are Japanese Americans seeking an opportunity to connect with their cultural heritage, while for many others, taiko drumming is way for them to express their creativity, enhance their well being, and develop meaningful connections with other who share the joy of drumming. Makoto Taiko is proud to promote a diverse membership of ages that range from 5 to 65, gender, ethnic and religious backgrounds. Makoto Taiko stands out amongst the numerous taiko groups in Southern California due to its large size as well as its strong connections to Japan and Japanese culture.

In 2014, Makoto Taiko applied for and received tax exempt status as a 501(c)3 organization whose nonprofit purpose is educational and charitable.  Makoto Taiko’s exempt purpose is to (1) provide instruction in various forms of taiko drumming to the community, (2) hold performances to elevate spiritual sentiment in audiences through taiko drumming, (3) educate and spread awareness of this traditional Japanese art form to public and educational institutions.

In recent years, Makoto Taiko has increased in membership and classes, and broadened its performances to charitable and community organizations and educational institutions.

Makoto Taiko’s Board members, officers, and instructors are all volunteers.  Makoto Taiko’s operations are funded by student tuition and generous donations from members, friends, and family.

Makoto Taiko is more than just a place to learn and play taiko. Through our joyful and artful interpretation of Japanese culture, we spread energy, music and joy to  members and our local communities.

Makoto Taiko continues to expand in number with members from all over the Los Angeles area and performs at an ever-expanding list of events and venues throughout the U.S. including the Prayer Vigil for the Earth in Washington D.C., the Catskill Mountain Cultural Festival in New York, the Cathedral of the Lady of Angels in downtown Los Angeles, Shamballah LA at Level 3 in Hollywood, the United States Martial Arts Festival at the Redondo Beach Performing Arts Center, the Japanese American Cultural & Community Center in Little Tokyo, Pasadena ArtNight, and more.

Makoto Taiko is based in Pasadena, CA near Los Angeles and performs under the instruction of Koji Nakamura, former leader of the Shumei Taiko Ensemble and a 2007 Grammy Award-winner as a participating artist in Paul Winter’s collaborative CD album, “Crestone.”