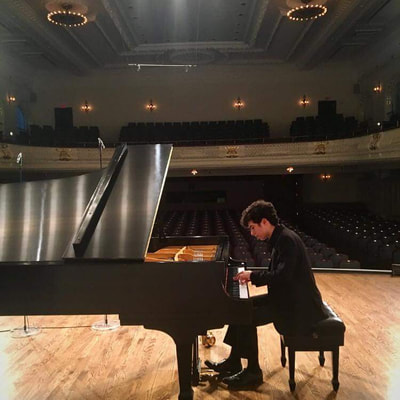 Benjamin Krasner is a performance/recording artist and composer, born in Los Angeles, California, hailing from a distinguished education in classical piano performance, and winner of New West Symphony’s 2015 Quick Bowman Competition. After 10 years of studies with Lubov Sorochkina, he began his college education at 12 years old and graduated at 16 with a Bachelor’s degree in Piano Performance and Economics from California State University Northridge under Dr. Dmitry Rachmanov. At 18, he graduated with his Master’s degree in Piano Performance and Literature from the Yale School of Music, Yale University under Pf.s Boris Berman and Wei Yi Yang. At 20, Benjamin graduated from the esteemed Curtis Institute of Music with an Artist Diploma/Post-Baccalaureate degree under the Mark. E. Rubinstein Fellowship, taught by pianist Jonathan Biss and pianist/conductor Ignat Solzhenitsyn.

His youthful career as a pianist was successful and lucrative. At 7, Benjamin was invited to Moscow by Vladimir Spivakov to perform at the “Moscow meets Friends” International Music Festival. Since then, he has performed globally and has been recognized at various international competitions and festivals for his artistry, including the Antena 1 Prize at SIPO International Piano Festival in Óbidos, Portugal (2016), The International Holland Music Sessions (2018,19), Los Angeles International Liszt Competition (2014), the Liana Cohen Foundation Music Festival, Virtuoso Belcanto Festival, as well as an orchestral debut of Saint Saens’s Piano Concerto No. 2 (2014) as a result of winning the Palisades Symphony’s Young Award Competition, with recognition from the Los Angeles Philharmonic. International festivals provided Benjamin with the opportunity to study with some of the world’s most prominent pedagogues such as Boris Berman, Wei Yi Yang, Peter Frankl, Mikhail Voskresensky, Paul Badura-Skoda, Luiz de Moura-Castro, John Perry, Marian Hahn, Eduardo Delgato, among others.

His years in conservatory saw a rigorous performance schedule and many fruitful experiences: exposing him to an environment of collaboration with peers and mentors, allowing him various opportunities to perform and collaborate with instrumentalists and chamber performers, and provided a platform for him to participate in new music premiers and experiment with modern, improvisational, and electroacoustic performance practice. After 8 years of intensive training in the Western European /Classical performance tradition in high-level institutional settings—places of stability and structure in study and performance practice, often nestled a safe distance from the Unknown—Benjamin now finds himself in a state of transition, entering a period of flux with an unknown point of rest or destination. He now endeavors to reach a contrasting extreme in his creative practice and aesthetic, via an exploration of contemporary/new music practices, improvisation, and mixed-media performance art while still maintaining the unparalleled technical and interpretive foundation he achieved in classical performance and study. In April-May of 2020, Benjamin was prone to dive into this emancipated creative space, by means of spearheading a large-scale collaborative performance and installation series in April/May 2020 in Philadelphia and New York City (see below). However, because of the pandemic, this project was to be put on hold, along with various other performance opportunities. In the ample amounts of newfound time for practice and experimentation, Benjamin has been maintaining a keen study of specific periods of music from the 1900s (ranging from Impressionism/Expressionism to the works of John Cage and Morton Feldman) and exploring the possibilities of electro-acoustic performance practice, developing techniques tailored to his specific abilities and interests.​