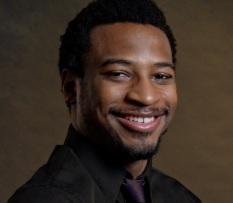 Xavier Foley is known for communicating his virtuosity and passion for music on the double bass, which is rarely presented as a solo instrument. Winner of a prestigious 2018 Avery Fisher Career Grant, he was recently recognized on New York WQXR’s “19 for 19” Artists to Watch list, and featured on PBS Thirteen’s NYC-ARTs. As concerto soloist with orchestra, he has performed with the Atlanta Symphony, Philadelphia Orchestra, Nashville Symphony, Brevard Concert Orchestra, Victoria Symphony, Sphinx Symphony and Sphinx Virtuosi at Carnegie Hall. Foley won the 2016 Young Concert Artists International Auditions along with four Performance Prizes and a Paiko Foundation Fellowship, and First Prizes at Astral’s 2014 National Auditions, Sphinx’s 2014 Competition, and the 2011 International Society of Bassists Competition. In 2018, he made his acclaimed New York recital debut at Merkin Concert Hall and his Washington, DC debut at the Kennedy Center’s Terrace Theater on the Young Concert Artists Series. The program included two of his own compositions. He has also performed at Carnegie Hall as a Laureate of the Sphinx Competition, at the Young Concert Artists Series at Alice Tully Hall and the Morgan Library, and for Boston’s Isabella Stewart Gardner Museum, Paramount Theatre in Vermont, Harriman-Jewell Series in Missouri, and Buffalo Chamber Music Society.

An active chamber musician, Foley has appeared at the Marlboro Music Festival, Tippet Rise Music Festival in Fishtail, MT, Bridgehampton and Skaneateles (NY) Festivals, New Asia Chamber Music Society in Philadelphia, South Mountain Concerts, Wolf Trap, and with New York’s Jupiter Chamber Players. A native of Marietta, GA, Xavier Foley is an alumnus of the Perlman Music Program, and earned his Bachelor of Music from the Curtis Institute of Music working with Edgar Meyer and Hal Robinson. His double bass was crafted by Rumano Solano.

Also a composer, Foley was co-commissioned by Carnegie Hall and the Sphinx Organization for a new work entitled “For Justice and Peace” for Violin, Bass, and String Orchestra, which was recently performed at venues including Carnegie Hall as part of a program designed to promote social justice. Foley’s For Justice and Peace is an exceptional work created to mark the arrival of about 30 Africans aboard the English ship White Lion in Hampton, Virginia in August 1619. This is one of the most significant events in US history and marks the beginning of race-based bondage that defined the African American experience. Xavier introduces his lyrical yet agitated melody in the cellos, and it is transformed throughout the work. He brings many musical influences to bear and includes a powerful narrative element, a judge’s gavel. Xavier Foley will present this piece with New West Symphony alongside fellow Curtis Institute of Music classmate, violinist Eunice Kim.