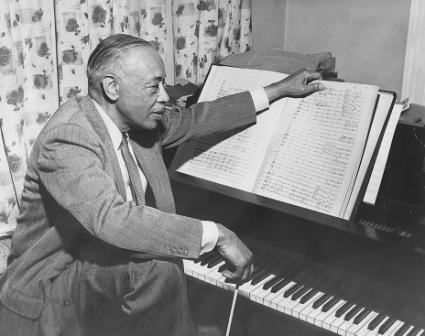 William Grant Still Jr. (May 11, 1895-December 3, 1978) was an American composer of nearly 200 works, including five symphonies, four ballets, nine operas, over thirty choral works, art songs, chamber music and works for solo instruments. Born in Mississippi, he grew up in Little Rock, Arkansas, attended Wilberforce University and Oberlin Conservatory of Music, and was a student of George Whitefield Chadwick and later Edgard Varèse. Due to his close association and collaboration with prominent African American literary and cultural figures, Still is considered to have been part of the Harlem Renaissance.

Often referred to as the “Dean of Afro-American Composers,” Still was the first American composer to have an opera produced by the New York City Opera. He spent the latter half of his life in Los Angeles, California writing and arranging dozens of film scores and making an indelible mark on American musical life. Like many artists associated with the Harlem Renaissance, William Grant Still had roots firmly planted in the American West while collaborating with prominent African American literary and cultural figures.

William Grant Still has a notable number of firsts attached to his name including being the first African American to conduct a major American symphony orchestra.