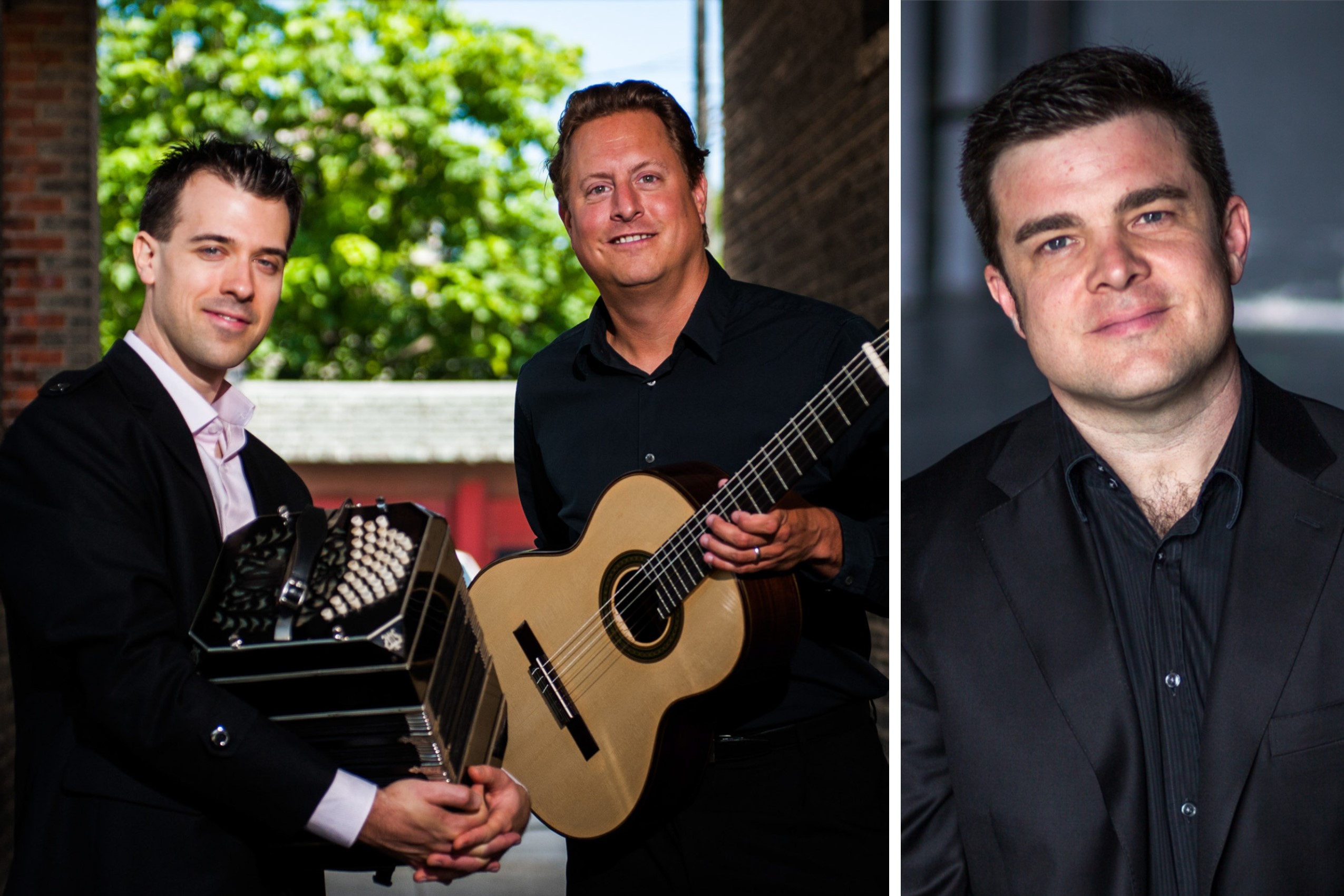 (THOUSAND OAKS and CAMARILLO, Calif. – Nov. 5, 2019) — On Saturday, November 16 and Sunday, November 17, 2019, Grammy-winning guitarist Jason Vieaux and internationally acclaimed composer, bandoneónist, and accordionist Julien Labro join forces to perform with New West Symphony, led by Music Director Michael Christie. As longtime collaborators, Vieaux and Labro have cultivated their creative musical partnership on stage and in the studio, breaking new musical ground with their 2016 album Infusion (Azica) and performing across the country. San Francisco Classical Voice reports, “Vieaux and Labro cannot disguise the joy they get out of playing together, a joy that makes their instrumental mastery that much more enjoyable to hear.”

Vieaux and Labro will give the world premiere of Canvas, Labro’s concerto for bandoneón and guitar with string orchestra. Labro was commissioned by New West Symphony to write this new work to pair with his arrangement of Piazzolla’s The Four Seasons of Buenos Aires – which the duo will also perform.

“As a musician and composer, I am inspired by the infinite possibility of sound and music, especially in an orchestral setting where each instrument is constantly contributing to an expanding number of possibilities,” Labro explains. “In addition to the instruments, the musicians create a second layer by bringing his/her interpretations and emotions to the written notes. What results is a beautiful intersection of sounds, textures, and emotions that transcend the written music. Canvas pays homage to this idea of sounds weaving together like the threads that come together to form a piece of canvas textile. The instruments and musicians interweave into a larger fabric of music that only exists when every instrument comes together.”

Vieaux will present a solo work, Devil’s Strum, written for him by Dan Visconti in 2010. Devil’s Strum is inspired by a commonly told myth surrounding American blues guitar playing, in which a man meets the Devil and strikes a bargain: in exchange for inhuman ability and charisma as a guitarist, the man signs over his eternal soul. Visconti explains, “In several versions of the myth, the central moment is when the Devil tunes up the doomed man’s guitar—the moment when the strings become awakened with unseen power and the man’s fate is sealed. This piece begins at just this moment—the moment of the Devil’s long fingers strumming the jangly strings— and proceeds as the instrument is literally tuned up, until ever faster and more virtuosic riffs drive the piece to its conclusion.” Devil’s Strum is the selected work for this concert cycle’s Entr’acte – New West Symphony’s new experience featuring a performance of a contemporary work to showcase a diverse array of composers during intermission.

Grammy-winner Jason Vieaux, “among the elite of today’s classical guitarists” (Gramophone), is the guitarist that goes beyond the classical. His most recent solo album, Play, won the 2015 Grammy Award for Best Classical Instrumental Solo.

In 2012, the Jason Vieaux School of Classical Guitar was launched with ArtistWorks Inc., an interface that provides one-on-one online study with Vieaux for guitar students around the world. In 2011, he co-founded the guitar department at the Curtis Institute of Music, and in 2015 was invited to inaugurate the guitar program at the Eastern Music Festival. Vieaux has taught at the Cleveland Institute of Music since 1997, heading the guitar department since 2001. He has received a Naumburg Foundation top prize, a Cleveland Institute of Music Distinguished Alumni Award, GFA International Guitar Competition First Prize, and a Salon di Virtuosi Career Grant. His primary teachers were Jeremy Sparks and John Holmquist. Vieaux was the first classical musician to be featured on NPR’s “Tiny Desk” series. Jason Vieaux plays a 2013 Gernot Wagner guitar with Augustine strings. For more information, visit www.jasonvieaux.com.

Heralded as “the next accordion star” by Howard Reich of the Chicago Tribune, Julien Labro has established himself as one of the foremost accordion and bandoneón players in both the classical and jazz genres. Deemed to be “a triple threat: brilliant technician, poetic melodist and cunning arranger,” his artistry, virtuosity, and creativity as a musician, composer and arranger have earned him international acclaim and continue to astonish audiences worldwide.

French-born Labro was inﬂuenced early on by traditional folk music and the melodic, lyrical quality of the French chanson. Upon discovering the music of jazz legends, he quickly became inspired by the originality, freedom, creativity, and the endless possibilities in their musical language. After graduating from the Marseille Conservatory of Music, Labro began winning international awards including the Coupe Mondiale, the Castelfidardo Competitions, and many others. In 1998, Labro moved to the United States, where he further pursued his musical dream. Equipped with advanced degrees in classical music, jazz studies, and composition, Labro draws from his diverse academic background and eclectic musical influences as he searches for new themes and untried concepts, transforming and developing his creative ideas into new projects.

Grammy award-winning conductor Michael Christie, Music Director of the New West Symphony, is a thoughtfully innovative conductor, equally at home in the symphonic and opera worlds, who is focused on making the audience experience at his performances entertaining, enlightening, and enriching.

Christie won a 2019 Grammy Award (Best Opera Recording) for the world premiere recording of Mason Bates’ The (R)evolution of Steve Jobs with The Santa Fe Opera (PENTATONE), and was featured in Opera News in August 2012 as one of 25 people believed to “break out and become major forces in the field in the coming decade.” At Minnesota Opera, Christie led 24 productions over eight years, six seasons as its first-ever Music Director (2012-2018).

2019-2020 is Christie’s first full season as Music Director of the New West Symphony, and he will lead operas with Indiana University Opera and Ballet Theater, San Francisco Opera, and Lyric Opera of Kansas City. Recent world premiere performances include An American Soldier by Huang Ruo with Opera Theatre of St. Louis in 2018 and The (R)evolution of Steve Jobs by Mason Bates with Santa Fe Opera in 2017.

Michael Christie first came to international attention in 1995 when he was awarded a special prize for “Outstanding Potential” at the First International Sibelius Conductors’ Competition in Helsinki. Following the competition, he was invited to become an apprentice conductor with the Chicago Symphony Orchestra where he subsequently worked with Daniel Barenboim as well as at the Berlin State Opera. Christie holds a bachelors degree in trumpet from the Oberlin College Conservatory of Music. He lives in the Twin Cities with his wife, Alexis, a physician, and their two children. For more information, visit www.michaelchristieonline.com.