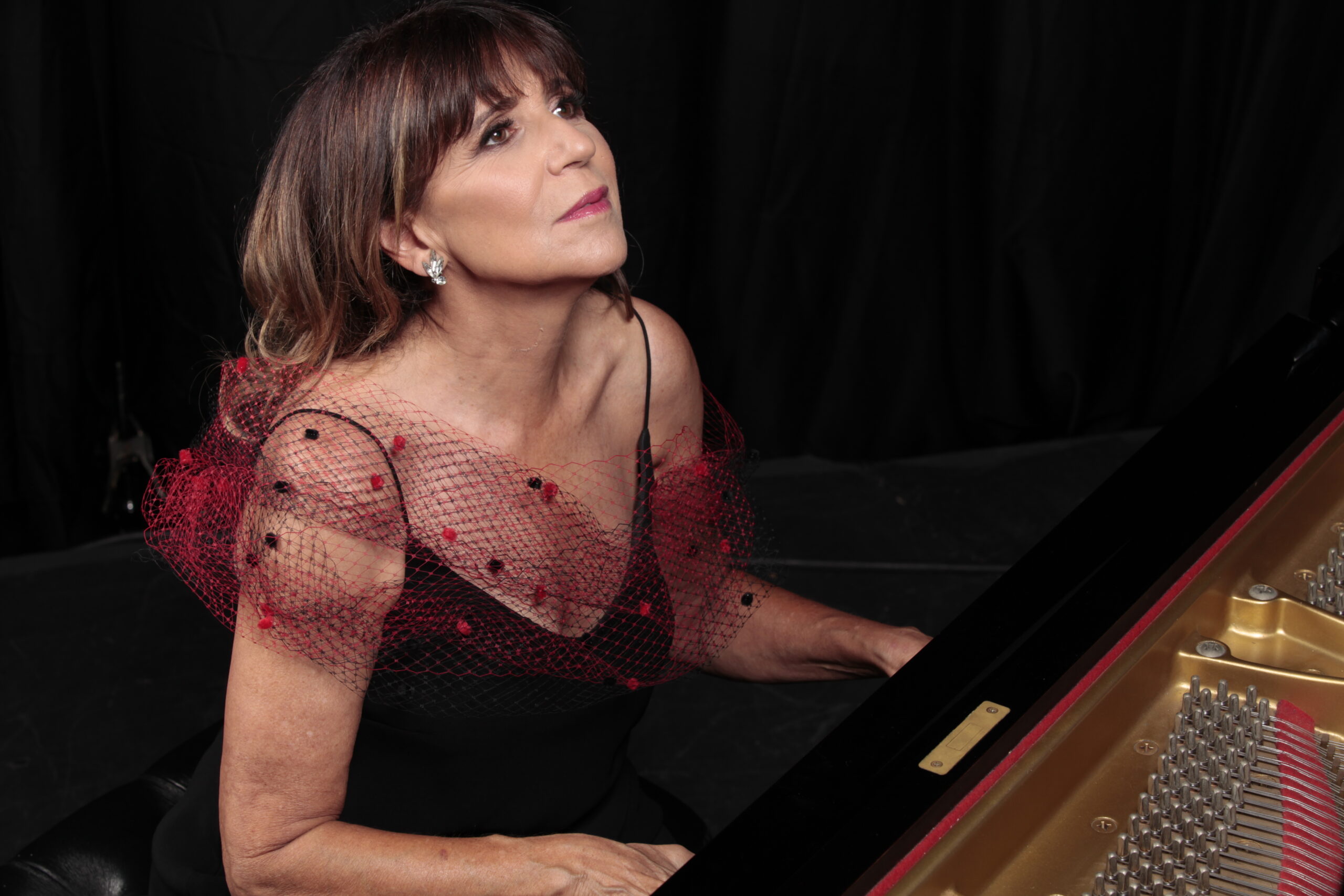 Pauline Frechette is a composer/performer with a foundation of playing in youth symphonies on violin, winning awards in piano competitions, touring Europe singing and dancing as a teen and studying acting in England. Born and raised in Northwest Indiana to French Canadian parents, she was one of eleven children.  Her father, Frigon “Lou” Frechette was a theatre organist and accompanied the Black Hawks hockey games at the Chicago Stadium on the largest pipe organ in the world.  Her great-grandfather, Josef Vezina, founded the Quebec Symphony.

Although blessed with many talents, Pauline feels her greatest gift and passion is composing music. Her works are best defined as “Neo-classical” DEF. “The use of modern techniques within the classical form composing music that reflects one’s own compositional voice.”  Her compositions have been performed by the Baltimore Symphony, Hollywood Bowl Orchestra, New West Symphony, Cincinnati Symphony, National Symphony at the Kennedy Center and at Walt Disney Concert Hall.

Pauline has composed songs for TV and Film and her musicals have been produced by The Goodspeed Opera House, the LaMirada Theatre for the Performing Arts and the Baruch Theatre in NYC.

As a singer/performer, she considers herself a 21st Century “troubadour” DEF. “a contemporary poet-musician.”  As a rock singer, she performed under the alias “Raven Kane.” Her credits include singing on major motion pictures (Aladdin, Rent, Mermaids …) performing/recording with many legendary artists including MUSE for the 2012 Olympics; Beck, Paul McCartney, Ringo Starr, Willie Nelson, Leonard Cohen, Cher, and duets with Neil Diamond on his World Tour.

In solo concerts Pauline moves effortlessly from neo-classical piano pieces to romantic jazz and humorous theatrical songs. She loves taking her audience on an emotional journey with humor, passionate haunting melodies and stunning vocals, often playing a grand piano live to videos of ballet, jazz, art and other forms of storytelling.  Frechette has brought cheering audiences to their feet with standing ovations at clubs and concert halls including the Troubadour in London, Carnegie Recital Hall in NYC and Thayer Hall in downtown L.A.

Pauline Frechette’s music is currently being played in over 125 countries and won the Silver Award in three categories for “Best Instrumental” at the International W.A.M. Awards 2021, and the Gold Award in 2021. Her music has over 14 million plays on the internet and has been #1 on the Reverbnation Classical charts nationally and globally for 3 years.

In 2021 Pauline was awarded the title “Ambassador for Peace through Music” by the Youth Education and Leadership Initiative (Y.E.L.I.) in Nigeria, Africa.

Program notes for “Tales of Winter” by Pauline Frechette

“Tales of Winter” is a suite of my compositions that were inspired and fueled by my passion for winter and my love of symphonies and ballet.

The pieces in “Tales of Winter” include:
Winter Wonderful – As a composer, I wanted to share with my audience what I consider to be the highlights of winter. That was my inspiration for creating “Winter Wonderful.” I included in my composition a few bars of “Jingle Bells” and “Deck the Halls” because those two melodies remind me of caroling with friends and reflect the true holiday spirit. My other melodies were inspired by the warmth of our home life with my French Canadian parents and ten brothers and sisters in freezing Hammond, Indiana. Winter meant ice-skating and sledding in the park, then sipping hot-chocolate while dreaming of a ride in a horse-drawn sled. For that effect my arranger/husband, David Campbell, added sleigh bells into his string arrangement to give the true feeling of a sleigh ride.

The MIschievous Fairie – As a child I believed in fairies. I knew they must exist because I saw one in my little golden book. They spelled “fairy” – “fairie” – and it explained that a “Fairie” was good and kind but also could be mischievous. Since I loved being mischievous myself, I decided that I would find a real “fairie” and make her my friend – or bring one to life somehow. Well, I never actually found a fairie, but being a composer I decided to bring one to life with music and dance. Thus I composed “The Mischievous Fairie” which I composed for my violinist friend, Kerenza, who I knew could breathe the life of a fairie into the piece, being a bit of a mischievous fairie herself. The notes to the piece just came effortlessly to me as I went into the make-believe world of fairies. The first two sections set the fairie up, where she and her fairie friends might be hiding somewhere in the Christmas tree and then she naughtily steals a ribbon off a gift and prances about the room having a great time. I especially love the middle section where I imagined my fairie would fly around the house with the flowing melody – perhaps dreaming of marrying the Nutcracker! The last section finds her dancing about with her fairie friends and then flying out the window with the lovely ribbon she so mischievously stole!

A Quiet Walk in the Snow – Growing up near the oil refineries of Hammond Indiana, the town mostly looked ugly with dirt and grime everywhere. But overnight that would change with the first snow of winter. Like magic our town became a wonderland of beauty. I would get up at dawn with my brother just to walk quietly in the snow before anyone else. It was so breathtakingly beautiful, we didn’t care that we were freezing cold. Hearing the crunch of our boots, tasting the snowflakes on our tongues and seeing snowflakes dance in the street lights warmed our hearts and made us glad to be alive.
As a composer I wanted to capture that magic in music and see it danced in a pas de deux where two lovers discover the beauty of untouched snow.

La Valse Féte – I love dancing and have always imagined going to a real Ball where ladies wear ball gowns and waltz with their partners into the night. The main theme of my composition starts out a bit timidly. I used chromatic tones to make it feel a bit like one is a little off kilter, perhaps in a dream. In fact, I originally titled this piece, The Glass Waltz, likening it to sliding around on glass. But I expanded the piece to include the second section, which changes keys and introduces a variation implying perhaps a new suitor has arrived and caught the dancer’s eye. Then the main theme returns, only expanded with a counter melody implying the dancers are twirling about. The second variation is quiet and I imagined perhaps a young girl has been watching the ball from her place along the wall, hoping to be asked to dance. Then it crescendos as a suitor takes her hand and they join the others, waltzing with great delight. In this last section I have all the themes interwoven and building with exhilaration to a point where two chromatic scales move in opposite directions bringing the ball to a festive end.