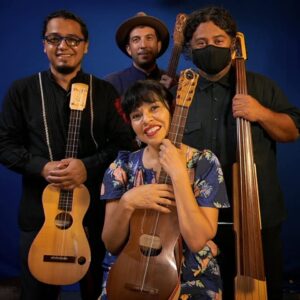 Cambalache (from a Spanish word that means exchange) , is a group of musicians from East LA., who play son jarocho music from Veracruz, Mexico, popular on the Gulf Coast, a cultural region shaped by indigenous and African culture, as well as Spanish. Cambalache promotes traditional Son Jarocho music that draws the audience in to participate in their performances in the spirit of the fandango, a traditional celebration based on music and dance.

Cambalache was founded in 2007 and led by Cesar Castro (Master Luthier Sonero and Jarocho from Veracruz, Mexico). Castro began studying Son Jarocho at the age of 11 with renowned harpist, Andres Alfonso Vergara. He continued his studies with Gilberto Gutierrez of El Grupo Mono Blanco, and at age, 16, he joined the group formally. With Mono Blanco, Cesar not only travelled through Mexico, the United Status and Europe, he began teaching this cultural tradition in community centers, schools and universities in Mexico City and Veracruz. From Gilberto Gutierrez he also learned laudería, how to make instruments used in the son jarocho tradition.

In 2001, Cesar began working with Chicanos in Los Angeles through a binational Exchange, Fandango Sin Fronteras that forged relationships cultivated through music, focused on building community and awareness through social gatherings, el fandango and participatory performance. In 2003 he moved to LA to teach Son Jarocho and during this time he also formed Quetzal, one of LA’s cornerstone, Chicano bands.

Xochi Flores began studying son jarocho with Quetzal Flores and Russell Rodríguez in 2003 and has continued her studies by traveling to Veracruz whenever possible and with Cesar Castro. She formed part of the first Encuentro of Chicano/as/ and Jarochos in Xalapa, Veracruz. Since then, Xochi has been instrumental in the Exchange by writing grants to bring artists and community workers to the US, in hosting as well as participating in groups such as Candela (all female son jarocho group from LA) Las No que No (all female son jarocho in Highland Park), and has collaborated with groups like Quetzal, Ozomatli, Son del Centro, Son de Madera and most recently with Laura Rebolloso, in performances, recordings, group presentations, fundraising and workshops.

Born and raised in East LA, Chuy Sandoval’s early musical background was formed in playing punk rock. He has been an active church musician in the greater Los Angeles area for over ten years and has had the opportunity to work with several OCP (Oregon Catholic Press) artists and composers. Chuy holds a Bachelor of Music in classical guitar performance from CSULA. Chuy was introduced to the traditional form or son jarocho in 2007 and has been an active and serious student of the genre ever since.

Juan Perez, on the upright bass, has performed and recorded with one of the most renowned jarocho bands from Veracruz “Son de Madera” for seven years, and has played with Quetzal for 10 years. Juan is widely recognized as the “go to” chicano bass player for all chicano- jarocho recordings, performances and for his overall knowledge of the genre