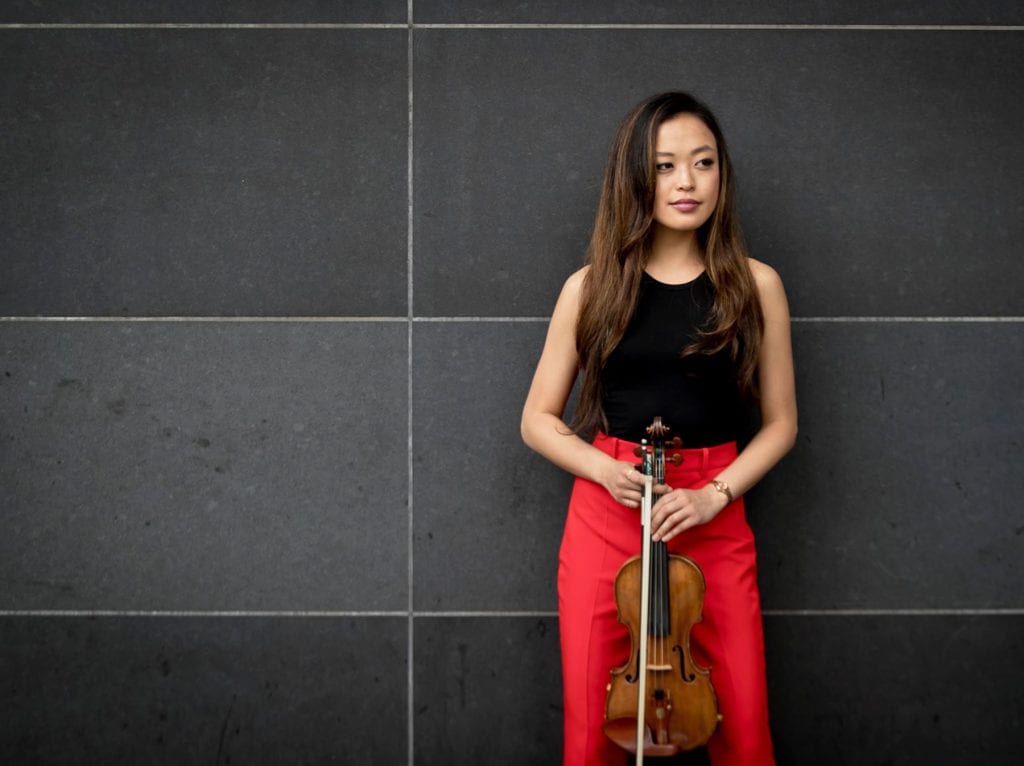 A young artist with a unique voice, violinist Eunice Kim has been proclaimed “just superb” by The New York Times and “a born performer” by Epoch Times. A native of the San Francisco Bay Area, the award-winning violinist has been featured soloist with many orchestras including The Philadelphia Orchestra, Louisville Symphony, Saint Paul Chamber Orchestra, the Seongnam Philharmonic, Bakersfield Symphony, and the Albany Symphony Orchestra, with which she recorded George Tsontakis’s Unforgettable, released in 2017 on Naxos Records. She made her solo debut at the age of seven with the Korean Broadcasting Symphony Orchestra.

Ms. Kim’s past performances include playing for the United Nations and Secretary General at Bohemian National Hall and the Henry Kissinger Prize Ceremony at the American Academy in Berlin. She was featured as a soloist at Carnegie’s Zankel Hall as a part of the Curtis Chamber Orchestra’s residency with Krzysztof Penderecki performing his Duo Concertante. She has appeared multiple times at the Kennedy Center as a performer for the Millennium Stage Series, representing the Curtis Institute of Music and San Francisco Conservatory of Music. As a guest artist for Curtis on Tour, she has performed across the United States, Taiwan, Hong Kong, South Korea, and Germany with Roberto Diaz. She was invited to perform on the “Ward” Stradivarius violin at the Library of Congress in Washington D.C.

An avid chamber musician, Ms. Kim has performed at festivals such as Marlboro Music School and Festival, Ravinia’s Steans Institute of Music, Music@Menlo, Music From Angel Fire, Taos School of Music, Aspen Music Festival, Great Mountains Music Festival, amongst others. She has collaborated with prominent artists including Miriam Fried, Nobuko Imai, Peter Wiley, Gary Hoffman, Ralph Kirshbaum, Cynthia Raim, and Eighth Blackbird. She is the former violinist of Ensemble39, a contemporary mixed string and wind quintet devoted to commissioning new music and pushing the boundaries of the concert experience. She performed at the Caramoor Center for Music and the Arts for two years as an artist in the Evnin Rising Stars series and performs regularly at the Chamber Music Festival of Black Hills.

A winner of Astral Artists 2012 audition, she has been partnered with the Philadelphia Orchestra Department of Education to perform outreach series and has also been invited to be a teaching artist for the William Penn Residency at schools in the Philadelphia area. Ms. Kim has been invited to perform and teach at numerous international music festivals, the latest ones including Teatro Del Lago Festival in Chile and Valdres Music Academy in Norway.

Ms. Kim graduated with a Bachelor’s Degree from the Curtis Institute of Music where she studied with Ida Kavafian and was the recipient of the Rose Paul Fellowship. She won the concertmaster position of the Curtis Symphony Orchestra, participated as a mentor in the Curtis Community Engagement program, and was awarded with the prestigious Milka Violin Artist Prize upon graduation. Ms. Kim began playing violin at the age of six and studied with Wei He at the San Francisco Conservatory of Music.